The safety of festival attendees, artists and volunteers is our top priority. With the world in the midst of the coronavirus pandemic and living in uncertain times, we have made the decision to cancel the 2020 Linlithgow Folk Festival.

Over the coming period, we will continue to hold 'virtual' sessions on our facebook page - please drop in and enjoy the next one on Sunday 17th May.

We look forward to reuniting everyone on our return next year - with the 2021 festival being held between Wednesday 8th and Saturday 12th September 2021.

In the meantime, we wish everyone and their loved ones the very best of health.

In line with Government advice, our monthly folk sessions are cancelled until further notice.  However, if you are yet to 'like' us on facebook, please do.  We are now hosting 'virtual' sessions online.

Ross Miller, the Burgh Piper, has recently launched his debut album.  To buy your copy on CD or as a download, please visit www.rossmillermusic.com. 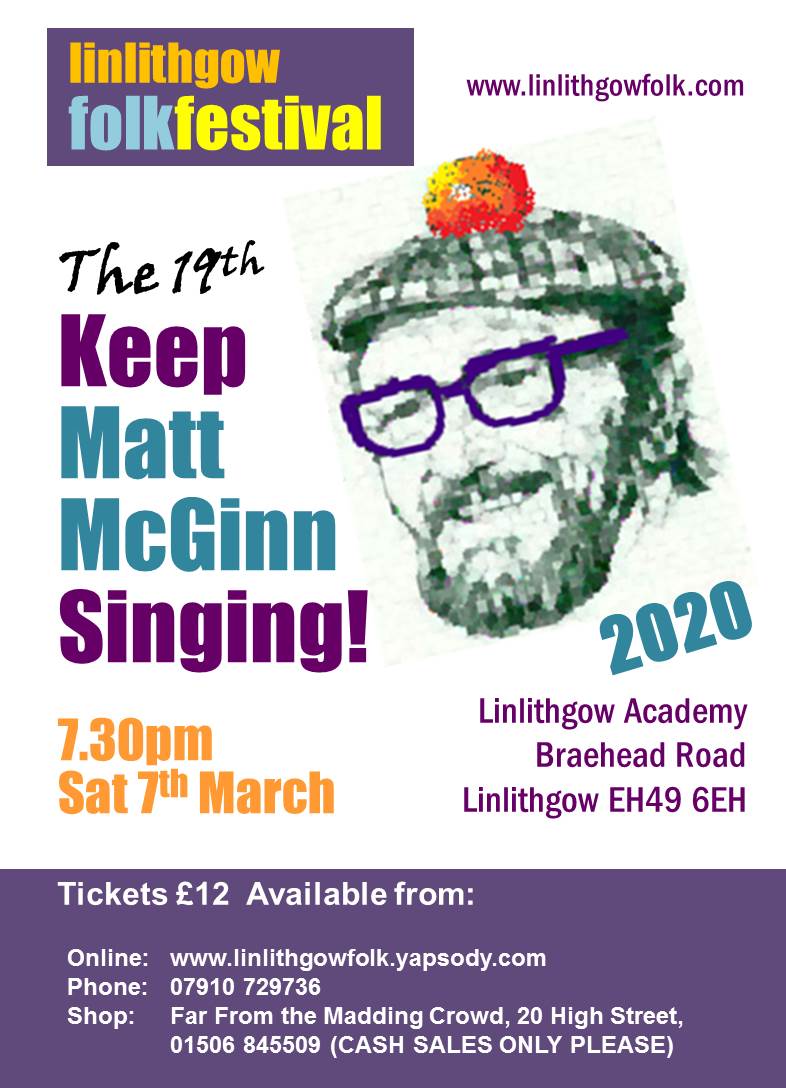 Forty three years after his tragic death in 1977, Folk music fans paid tribute to the memory of the late great Matt McGinn at an evening of songs and music in the Linlithgow Academy Theatre on Saturday 7th March 2020.

The Glasgow singer, songwriter, poet and raconteur was Scotland’s undisputed “King of Folk” in the 1960s and 70s. The rare talents of Matt McGinn made him a household name in Scotland and in Folk circles throughout the world. In 1962 he sang in a concert in New York's Carnegie Hall with Pete Seeger and a young Bob Dylan.

Matt went on to be regarded as one of Britain’s most powerful songwriters and became one of Scotland’s leading folksingers of his time. He died in 1977 at the age of only 49, but left some 500 songs, many of which, such as the Red Yo-Yo and Coorie Doon have become classics.

In recent years, Linlithgow Folk Festival Association has played a pivotal role in reviving Matt McGinn's work and presenting it in an innovative and entertaining way. Previous tribute nights in the town have played to packed houses. The 2020 event was bigger and better than ever, with singers and musicians of all ages from throughout central Scotland interpreting their favourite Matt McGinn material.

The Matt McGinn Night is a major fundraiser for the Linlithgow Folk Festival and all entertainers give their services free as a gesture of support. Proceeds from the show are used at the Festival to organise an outdoor music initiative at Linlithgow Cross - THE NORA DEVINE STAGE - which gives budding artistes the opportunity to perform at the very heart of the Festival.

For many years, the late Nora Devine ran the famous Linlithgow Folk Club and brought Matt McGinn to the town on several occasions.

Tickets are SOLD OUT.

There's Life In The Old Dog Yet

If you have followed the activities of the LFFA you will know Neil Macdonald is one of our stalwarts.

He has releaased a new CD entitled "There's Life In The Old Dog Yet".  He undertook the CD project after damaging nerves which made playing guitar more difficult - thinking that he would record while still able.

As it transpired, he never needed to play the instrument as he had so much help from Cockleroy partner Bob Proudfoot who added accordion, bouzouki, keyboard, whistle, bodhran and all manner of shaky things (you get them at our age!), while folk festival stalwarts George Machray, Isobel Roy and the late, lamented Wee Linties also brought their contributions to the table.

It took around 8 months to choose 19 songs to include, review and re-write the lyrics, and then for Bob to record, edit and mix the 20 tracks, the only instrumental track being the tune Neil dedicated to his wife who bravely took up the fiddle in retirement, appropriately called "Gracenotes".

The CD is out now and available at a cost of £10 from WILSON'S, NEWSAGENTS on the High Street near the Cross Well.

The 2020 Linlithgow Folk Festival has been cancelled

From time to time, we send emails to Friends of our Festival.  You will be the first to know when tickets go on sale and for Festival news.  Its FREE, so why not subscribe today ?